I mentioned that I planned to spend as much of my free time this weekend playing with felt.  Our original plans were altered at the last minute....so??  What's a gal to do!?! 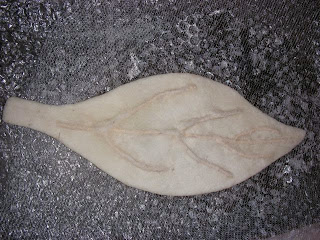 I've seen mobiles featuring felted motifs and that got me to thinking..... Before tackling a project like that I decided to try to make one large textured object. Again, I'm fairly new to felting, but am dedicated enough to spend a lot of time learning.

Here you can see the beginning process of wet felting a large leaf.  I used an off white pre-felt batting and narrow cotton cording and began the initial forming on a plastic resist. After the first two front layers held together just enough, the resist was removed. (I already have ideas how to alter the process for the next one!) 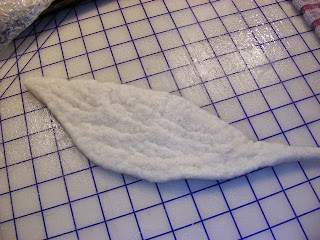 Finally here's how it looked after a major amount of manipulation, throwing, rolling, and generally beating up on the fibers to get them to 'felt' together. 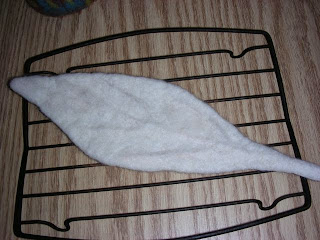 Drying on a wire rack. 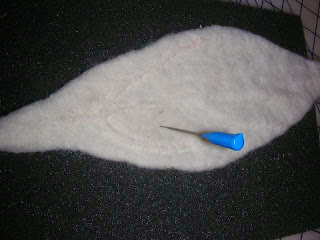 After it dried, I felt the veins lost a lot of definition. It seemed to me that needle felting close to the cording would help the veins pop out.....so I spent quite a bit of time poking! 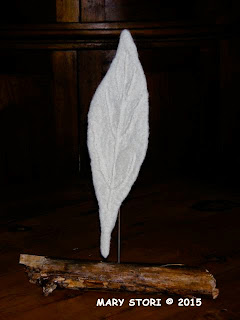 It's mounted on a narrow rigid steel rod which I inserted into a piece of wood found on my daily 'forced' march. 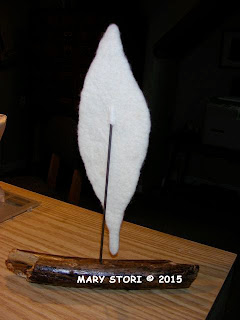 Back view
Posted by The Inside Stori at 6:30 AM

Well, I'll BE!!!! You did it! Now this is definitely a piece that would be in a showcase somewhere! COOL!

I am imagining muscles on your arms with all this pounding etc making your creative felt. How are your shoulders at the end of a felting session, I have not done wet felting for years as I found it so hard on the upper body

Love the way its mounted. Just beautiful. Love your story of how you literally beat this into submission. Looks cool.

Such a lot of work, but look at the results. Beautiful!

It was fun scrolling down to find out just what you ended up doing with it! It is really cool!! What a great idea to showcase all your hard work!

I tried felting..once. I took a class in it and the teacher asked each of us what we were going to make. Some said, dolphin, fish, bird, cat and when she came to me I said, "ball." Couldn't be easier than that I thought but the teacher said that would be quite challenging. I knew that this class was not going to go well and tried to think of a way to leave without anyone noticing but with my purse on the opposite side of the room I decided I had to stay and make the best of it. During my process of using the felting needle my lump turned into a swan shape and I proudly declared my plans had changed. "Yes" said the teacher, "that is a great beginning" and she reached down and pulled off its neck and head. "We'll attach it later." Turned out to be the best class I ever took. So much fun and my swan sits proudly on my shelf. Although the lady sitting beside me may disagree about the fun part as I called her cat a pig by mistake but it really did look like a perfect cute pink pig.