I'm slowly finishing the sunset/ocean/beach theme wall quilt that has consumed me for nearly 2 months.  Actually that's not for lack of effort on my part.....several areas of the design perspective details were challenging to overcome for this artist who doesn't draw. These beach chairs are an example.  After scouring the internet for samples that might be suitable, many more hours were spent redrawing to achieve the correct size/shape and then recreating in fabric.  Realistic landscape isn't my strength, however stylized designs have provided a new path to explore and enjoy. 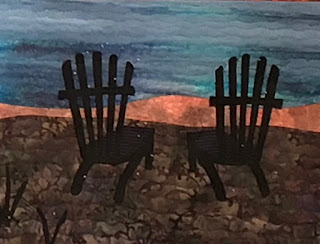 With that said, I'll go ahead and reveal some personal stuff.....thank heavens it's nothing life threatening, but definitely life altering for awhile. 'The husband' had a 6 disc cervical fusion a year ago, which failed.  That resulted in the development of several deformed vertebra, deep hollow sections in the skin, a broken screw still in his body, and constant pain.  Additional surgery to remove the titanium device and screw is very dangerous with a high failure rate so after getting additional opinions, he's decided not to risk it.  However, addressing the bulging vertebra, which sadly won't eliminate the pain, is still necessary. He'll be undergoing surgery this week and I will be a 'care-taker' again until he recovers enough to get up and about.

On top of that.....I'm facing some nasty oral surgery.....I'd rather take a greyhound bus across country - last seat by the toilet - than going to the dentist.  I'm already working myself into quite the tizzy!  I've been taking medication for osteoporosis for over 20 years and have been aware of the correlation between these meds. and jaw bone loss.....it's not common but it looks like it struck me.

So, if my posts are a tad sparse in the next couple of weeks you'll know why.  We are moving forward with positive attitudes and feeling fortunate there are solutions to our issues and as I said, these are not life threatening....just annoyances that take me away from my studio!!
Posted by The Inside Stori at 6:30 AM 9 comments:

I've had way too little time to sew lately and will have even less with a full schedule ahead. The 10th annual PTA retreat is at the very beginning of March and given my other commitments I was stressing over what project I'll be working on.

I'm one of those who needs to be organized and prepared....no last minute rushing about for me.......I need order and until I achieve it....I'm not fit to live with!

So, due to the successful sales of several of my Japanese theme quilts at Woolworth Walk (amazing to me since this is definitely NOT my normal style), it makes sense to create another one. Retreat is CRAZY.....non-stop silliness, food, beverages, and of course sewing.  Selecting a no brainer piecing project is about all I'm capable of accomplishing in this setting.  Pre-cutting everything ahead is mandatory.

After a couple of false starts I now have a plan.  One would never guess it's taken me nearly two full days to select, cut, and arrange these focal squares. I have tons of Japanese fabrics, yet it's amazing how often they don't play well with each other.  The blocks will not be set with white as shown here on my design wall.......but had I thought of it.....I would have.  (Next time!!)  However, the two different colors of setting strips are now cut and ready to be pieced.  Stay tuned for 'after PTA retreat report'.....though honestly so much of what happens there.....as they say "stays there'!!! 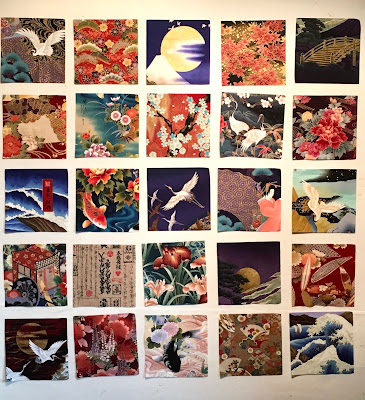 This post is off the normal fiber focused subject......so read on at your own peril!

This is an excerpt from the book "Nightwoods" written by Charles Frazier. You might be aware of his others, "Cold Mountain" & "Thirteen Moons".  The books deal with areas in Western North Carolina and Haywood County, where we live.  "The husband" has been reading this book and was struck by the following passage. From day one of moving here, we noticed this unusual tree in the common area of our development.  The questions are: Could this be natural?  If not, who did it?  Where does it point?

"Farther on, along a stretch of trail Luce had walked at least a dozen times, she noticed something new to her, A stout old oak partly screened by younger trees, the first four feet of its trunk hollow and the crown nearly dead. What Luce first thought was a low limb, much thicker than her torso, ran parallel to the ground and then made an unnatural upward right angle. At the L, a knob of scar.

Luce went to the tree and cupped her hand on the knob. She realized that the odd limb was really the deformed trunk and knew this was a trail tree. One day two or three hundred years back, in a different world, somebody bent down a sapling and torqued it in the middle and sliced it partway through at the angle and tied it to a stake in the ground with withes or ligaments to make it grow that way forever. When the cut healed, the scar kept growing, like an old mans nose, and it was where the nose pointed that mattered, ‘Go this way’ was the message nobody had received for a long time” 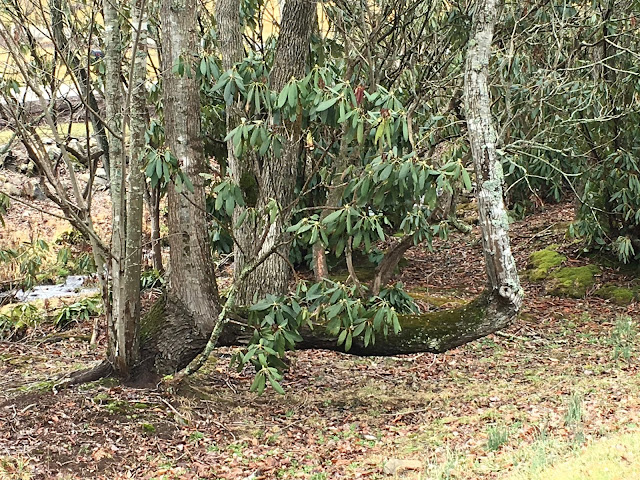 It turns out there are similar trees that run all across this country.  A fledgling rhododendron partially obstructs the drama of this tree which grows along side one of the 3 small creeks that run through our development. YET the nose is quite clear right side of horizontal limb).

There are groups that research such trees for authenticity. We've submited this one and are looking forward to hearing their opinion. It doesn't appear to be 100 years old but who knows.  Follow these two links here and also here if you'd like to read a tad more about this interesting navigation system most often attributed to Native Americans.

HEARTS ARE THE ORDER OF THE DAY 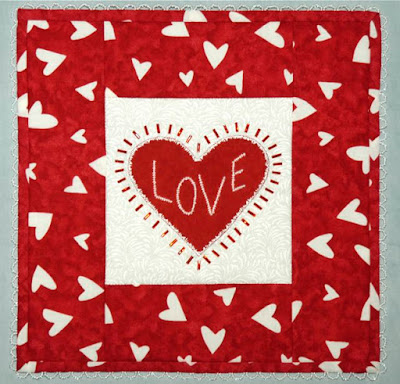 Commercial cottons,machine appliqued, bead embellished. This quilt was featured in Fons & Porter's "Love of Quilting" magazine Feb. 2004 - pages 18-20.  AVAILABLE HERE
Posted by The Inside Stori at 7:41 AM No comments:

Continuing our art camp adventures.......while each batch of our eco-printing simmers for 2 hours we spent time indigo dyeing. 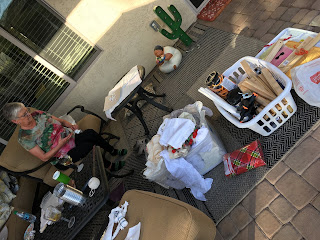 Nan is a terrific & generous host.....we work on her large patio which overlooks a golf course.....allowing us plenty of space to spread out. 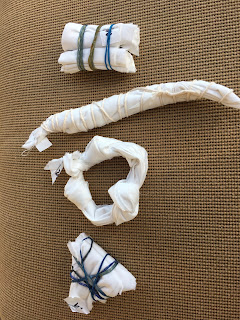 Some artists get very scientific with their folding/stitching/wrapping methods, all which act as resists for the dye penetration and dictates the designs.  We were less so....as we chatted away enjoying the beautiful sunny day. 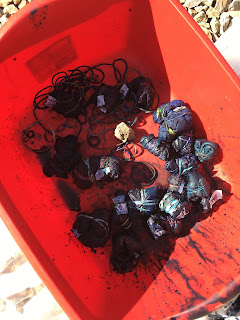 We had prepared the indigo dye bath ahead of time. I decided to dye half of my bundles dry and the other half after soaking in water for about 10 mins.  After massaging each packet in the indigo bath for 2+ mins., it was removed and placed in a bin.....allowing the dye to set a bit longer. 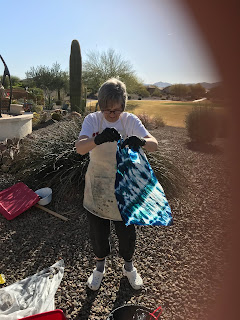 I'm now unwrapping one of my dry packets....you can see how the color turns from green to blue as it reacts to oxygen.  I found the pieces dyed from the wet stage had less white than the dry ones.  Of course the way it is folded/manipulated also affects the outcome. 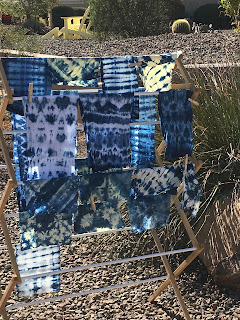 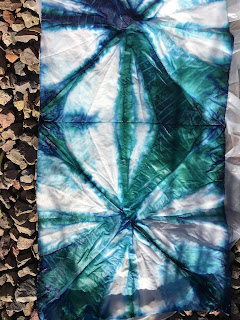 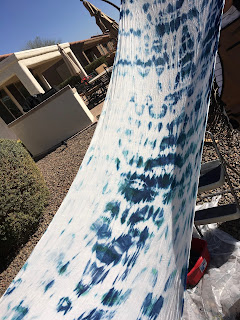 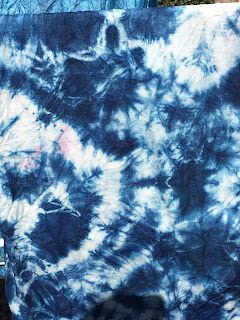 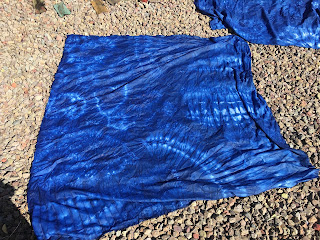 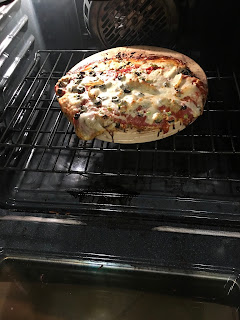 And we eat well too......homemade pizza that didn't quite stay on the hot pizza stone....totally my doing as this Cheesehead really piled on the cheese!

It sure has been awhile since my last post......I haven't been idle!  Actually, time flew by as I enjoyed our 7th Annual Girlfriend Art Camp at a friend's home in AZ. 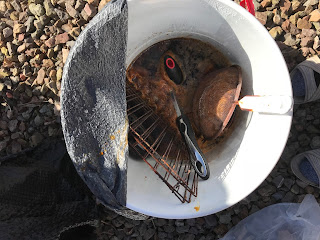 My two buddies had never eco-printed so with instructions sent ahead of time, Nan got an iron/rust pot started.  Basically one soaks metal objects in a solution of vinegar and water for a week or so.  It's used in eco-printing when a darker image is desired. 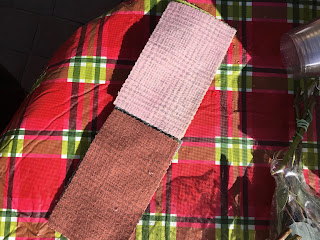 I brought a bunch of dyed wool fabric samples to print on. Instead of using square cedar shake shingles as presses to hold our fabric/leaf layers, we had to substitute long narrow wood shims.  We used two on the bottom and two on the top.....challenging since they were uneven in depth. 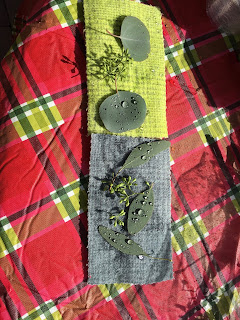 Here's one of the layers....instead of dipping the leaves or fabric in the rust water, these layers were spritzed with a vinegar and water solution which also helps to develop definition of the prints. 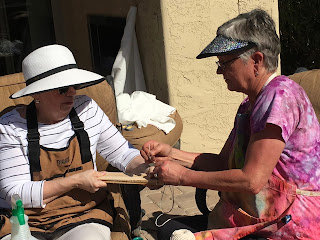 The size of the shims required two people to wrap with string....here Sue and Nan are securing one batch. 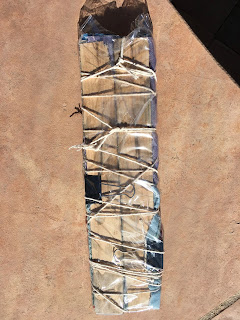 When possible we secured with binder clips in addition to the string.  We also used shrink wrap which provides a tighter bond when it simmers in the vinegar/water bath. 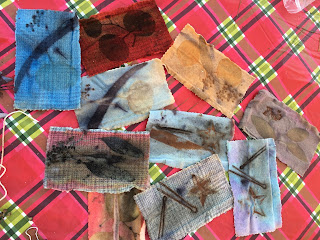 Here's a look at some of my prints. Nan had some rusted nails and stars that were fun to use as well. 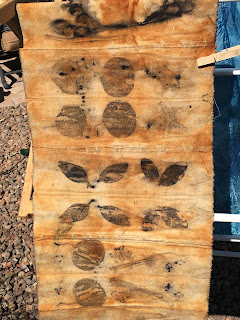 I'm totally in love with silk noil and have been using it for ages in garments and wall art.  You can see by the horizontal lines that this narrow piece was accordion folded to fit between the shims.  The fabric was dipped in the rust water prior to adding leaves and folding.

We didn't stop with just eco-printing....come back to see what else we did.....

OH MY.......this piece is taking forever to finish......therefore my posting has been sparse.....  Lot's of details still to be added but here's an updated peak at its progress. 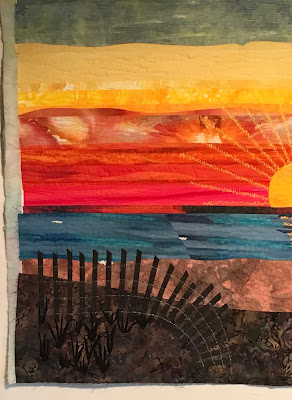 Finishing will have to wait a bit longer as I'm off to AZ for our 6th annual 'girlfriend art camp', with several buddies.  'The husband' and Sooty our rescue lab will be holding down the fort at home...... Photos of our fiber adventures coming soon.....

Check out what other artists have been up to this week:  Nina-Marie's Off The Wall Friday & Sarah's Whoop Whoop Friday.
Posted by The Inside Stori at 6:00 AM 10 comments: