After over a month of obsessive work..   SOLD 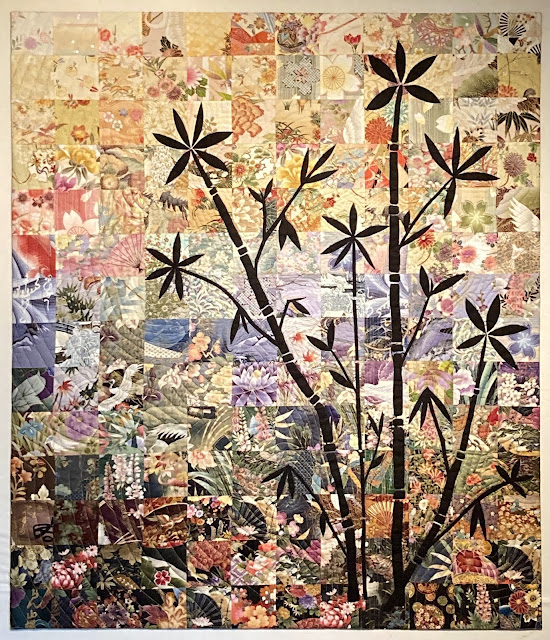 It's funny how a quilt can seem to physically grow as one manipulates and man handles it through the machine during the quilting process.  It's been compared to wrestling an alligator and I tend to agree.

Working with metallic thread is visually such a bonus for the work, but often a headache for the artist.  You'd think at my age I would have already learned patience..... 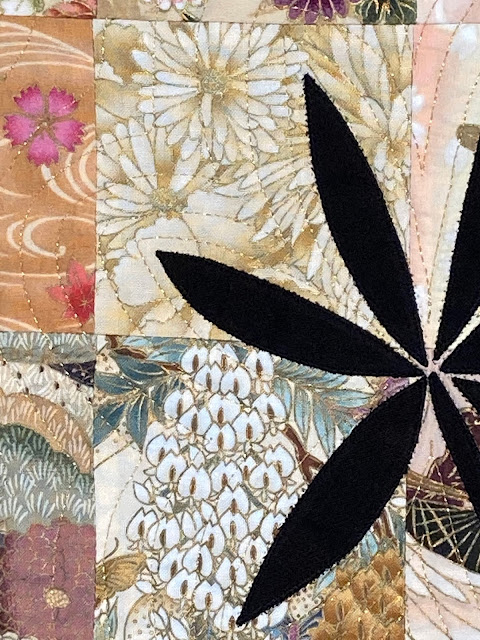 I've been torn about how to finish the edges and finally decided to face them.  After 20+ hours of machine quilting, completion is right around the corner.

ALONG THE WAY TO MAKING THIS QUILT

Over two weeks in and the background is pieced, the appliqué motifs have been all hand drawn & cut, auditioned, and fused in place. This last step is what caused a big oops. 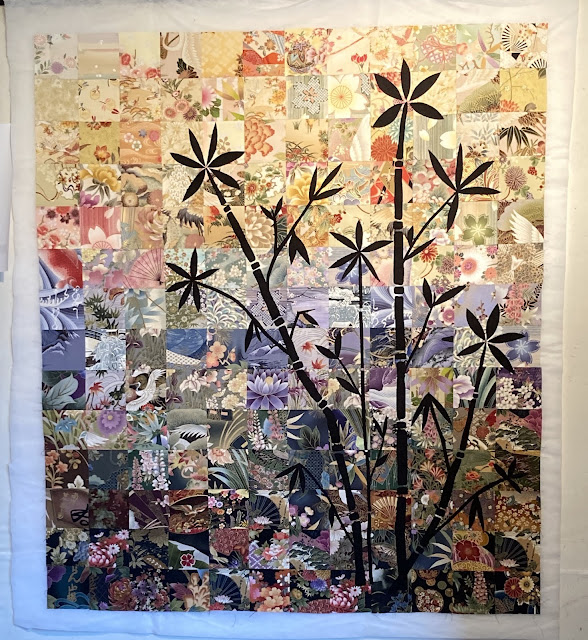 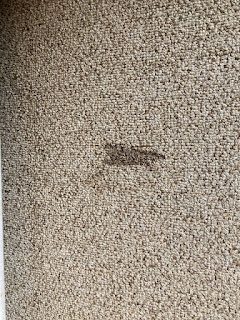 I use a smallish hand held iron (HOT) to fuse motifs in place while the work is on my design wall. See the iron here:   It's far more efficient and accurate than trying to move lots of pinned motifs to a pressing surface.

This project was quite a bit larger than previous ones and during some minor readjustment, I temporarily placed the iron upside down on the carpet....being sure the hot surface didn't touch it.  Hummm....not careful enough, it tipped over and now I have this ugly and unrepairable mess.  I'll have to sell this quilt for thousands in order to make up for what it will cost to replace the carpet for the entire loft studio.  Big sigh here.   Anyone want to bid on this 37" x 43" piece now??? 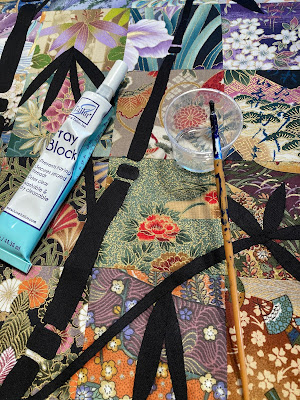 To end on a more uplifting note, here's another example of why this quilt has taken over 2 weeks of solid work just to get to the point of appliquéing the motifs.

I've never found solid, black, black cotton fabric that doesn't fray more than it should.  Why is that?  If anyone knows a source, please share.  I'm terribly fussy about the look of frayed edges.....which is why it took me years to replace hand appliqué with fusing.  Batiks of course work pretty darn well, but there's no such thing as solid black, black.  Traditional black fabric is always a problem!  Here's a trick I learned from Linda Cantrell....a very skilled appliqué artist. it's another time consuming step, but worth it to me.  I run a thin line of Fray Block along all edges to be appliquéd.  (Follow manufacturers directions!!)  It helps to tame the unsightly thread bits.  However, many times have to come back after the machine appliqué has been completed with a tiny sharp embroidery scissors and tidy it up even more.

We are having another rainy fall day here in the mountains of Western NC.....sure wish we could share it with he folks out West who need the rain!  I guess I'll just hunker down and start appliquéing all those edges.....happy, happy!

Lucina is other long time reader of this blog and collector of my work.  She shared this lovely display of one of my felted wool wall pieces (featuring a sea shell attached with a woven length of beads.

Along side this clever hanging device is a set of prayer beads she created in a workshop and a 1.25" x 2" woven basket made  by one of the Great Basin Basketmakers.

As you can see she has quite an eye for art!!  Thank you for sharing it with us Lucina! 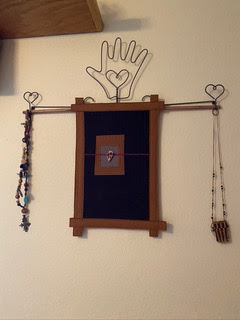 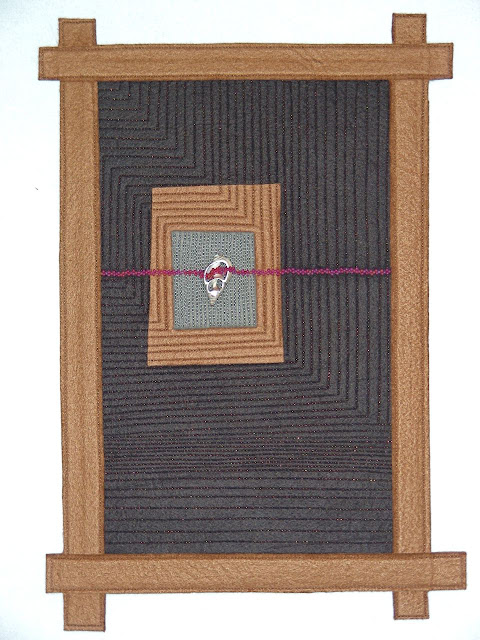 Posted by The Inside Stori at 8:53 AM No comments:

How encouraging all your comments regarding this project have been.....thank you! I was nearly swayed (by the occasionally lazy part of me) to quilt this unintended color wash wall quilt and call it finished.

But, the creative side of me just couldn't go there.....I strive to create one-of-a-kind pieces.  I'm not a pattern follower, preferring instead to develop my own designs.  So......here's where I'm headed.  The actually applique is going to be a real challenge since I don't free-motion stitch.  There will be lots and lots of quilt turning/adjusting, starts/stops, & tying off of threads.  But I do love a challenge.

The appliqué audition process is not yet complete.....so I'll just keep you posted as the work continues. 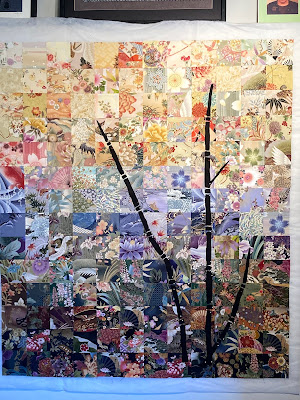 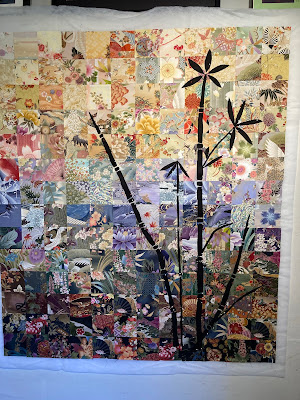 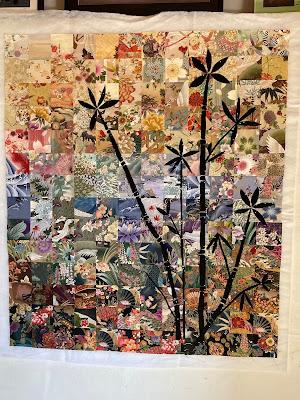 DISPLAYING ALL THOSE FELTED ACORNS

Those of us who sell our work don't often have the joy of seeing how it's displayed.  Today I'm sharing two examples.... 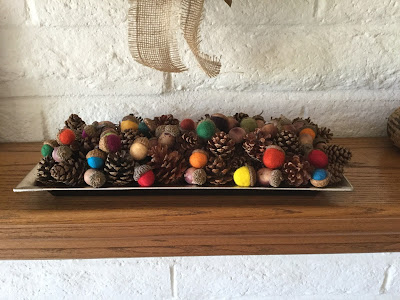 I love how Kris who lives in CA, is embracing the fall by combining the acorns with pine cones.  What a really great idea.....Kris is a long time follower and happily for me a frequent collector of my work. 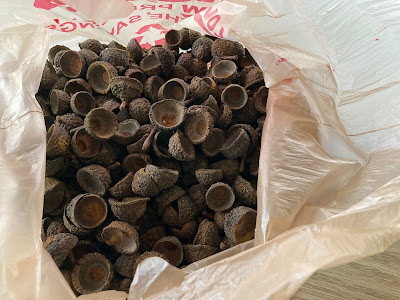 Pals David and Dianne collected these acorn tops on walks near their home after obtaining a batch of felted ones from me.  I had mentioned I was totally out of caps large enough to make more.  Thank you!!!!  Yeah, I can get busy again! 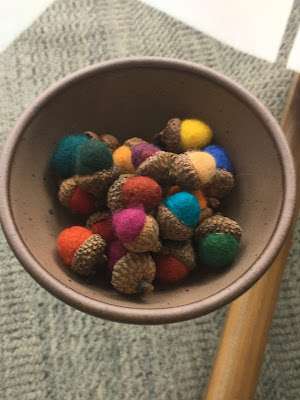 Here is their display, shown in an Asheville made pottery bowl.

I've also seen my felted acorns scattered along the center of a holiday table, but unfortunately I don't have a photo.  They are fun to make, though of course as all wet felting is.....TIME consuming.  They are even more fun to see being appreciated!

Several regular readers requested that I continue posting process photos of what started out to be a simple patchwork of small leftover pieces from my Japanese fabric stash.  Turns out it appears to be a wanna be colorwash quilt.

As I've mentioned before, that wasn't my intention, but apparently it's what happened.  Here's the completed top, now being prepared for the addition of applique motifs.  I sure hope I can combine the two designs into one cohesive piece....stay tuned.... 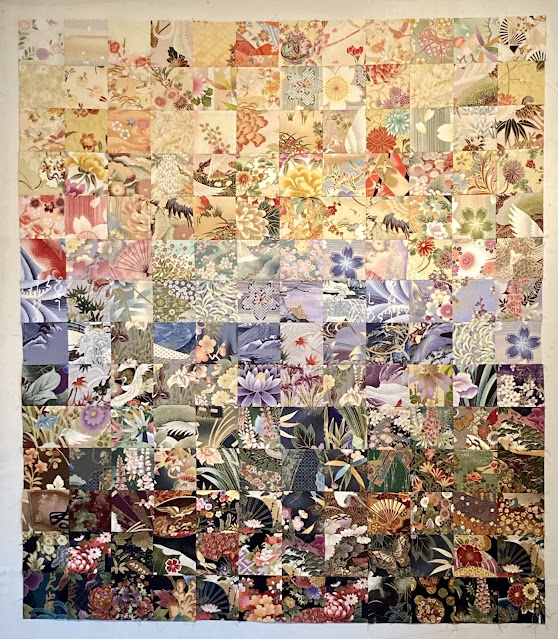 CRUSIN' THE BACK ROADS

Social distancing at its finest.....driving the mountain back roads on a crisp fall day with our local PCA car club....... 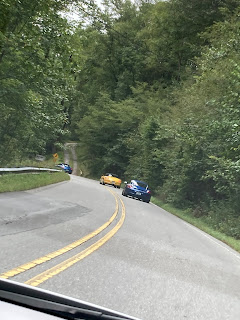 YES, it's growing.....struggling to find enough multicolor prints that work together. Though it appears the goal is a color wash quilt.....actually it's not.....stay tuned to see what I have planned. 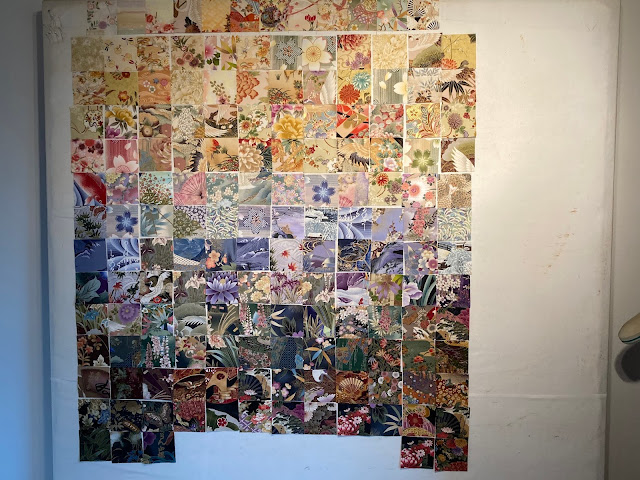 JAPANESE FABRICS ARE CALLING ME 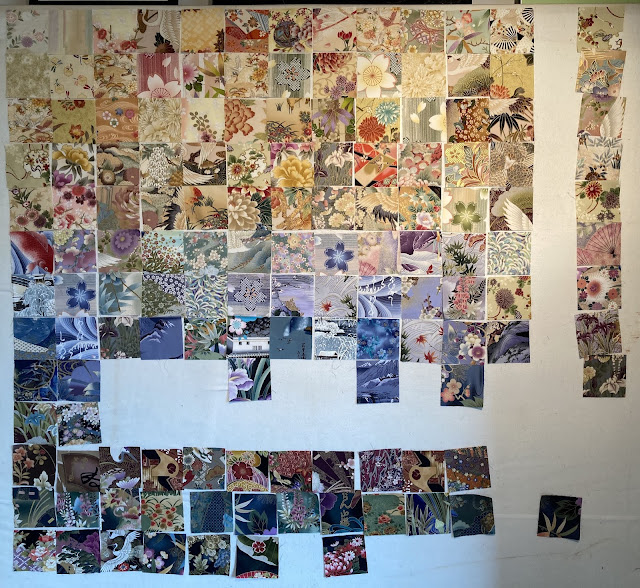 SOME STIRRINGS OF LIFE AGAIN

Many of us are worn out by these last 6 months.....so I'm trying to focus on the positives.  Life hasn't returned to normal (will it ever??) but signs are pointing to our resilience.

Woolworth Walk Gallery, downtown Asheville, NC, where my pal Judy Simmons and I display our fiber art has seen a slow but steady return of shoppers helping to support the local small businesses.

I'm thankful to an unknown visitor who has given this piece a new home. 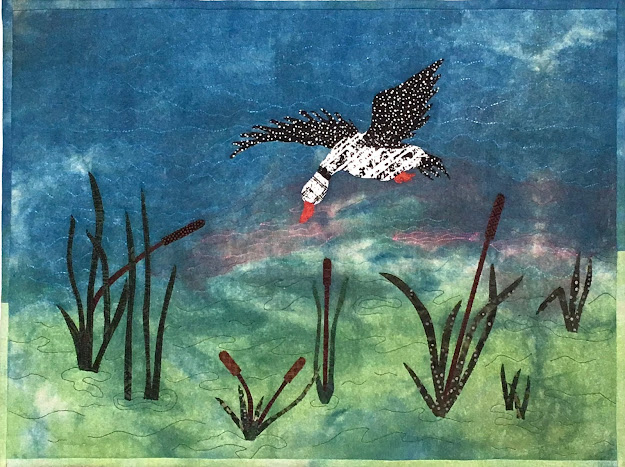 FALL IN THE MOUNTAINS

This summer we've seen more fog in our mountain valley than ever before. It's an amazing sight to watch a fog bank come rolling up the valley as it slowly encompasses our house. 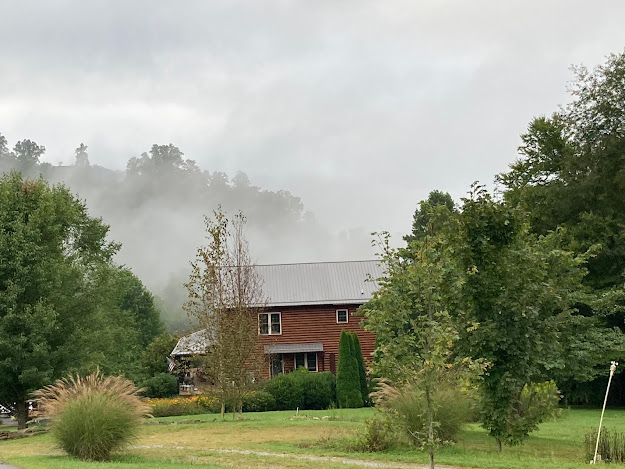 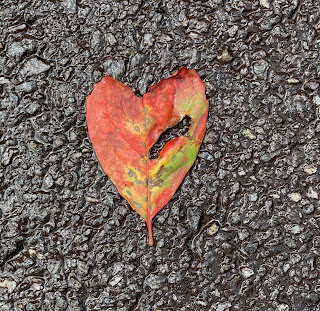 On the 2nd 'Forced March' march of the day, with rescue black lab Sooty.....I spotted this beauty.....hummmm a broken heart reflecting all the drama that our country is enduring?
This is a fiber blog, I don't do political statements or lecture about social significance....but today I want to say a word about 9/11.  Hard to believe it's been 19 years.  Everyone remembers where they were when they heard the news.  My story isn't any more or less important than others, but it's an especially memorable day for me.  It was the first of 2 days that I was a bone marrow donor (which was via stem cells) for my identical twin sister at the City of Hope in CA.  It had an enormous impact on my life.
Posted by The Inside Stori at 6:00 AM 2 comments: 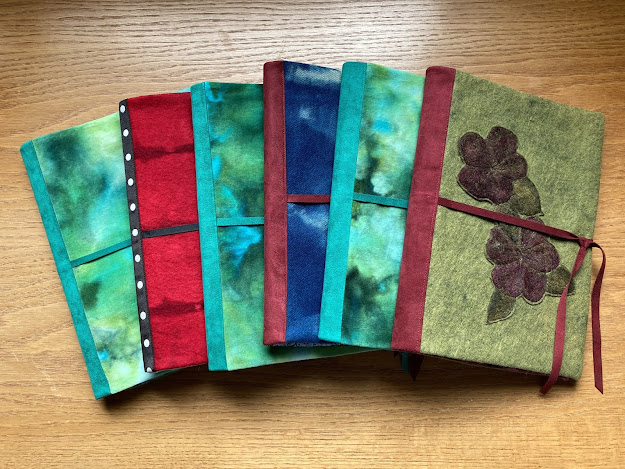 ** update - from left to right....#4 (indigo) and #6 green with floral applique - SOLD    Covers are made using a variety of fabrics. Techniques include hand resist acid and indigo dyeing, as well as ice-dyeing.  They feature Ultra-suede (& 1 ribbon) spines and ties, coordinating cotton linings, and each is filled with a lined composition book.  8" x 11"

I'll be adding these to my gallery inventory soon, however for a short time,. if anyone is interested in doing a direct purchase....holler.

I'm back to making covered composition book covers for my Woolworth Walk Gallery inventory. It's crazy that it takes me longer to select and cut the cover fabrics and lining combinations than it does to sew them. A nice change of pace from creating art quilts. 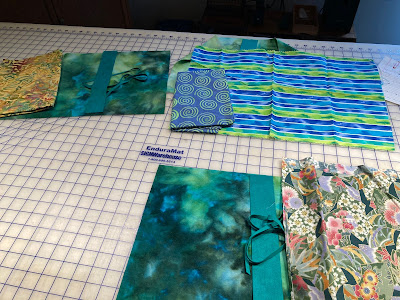 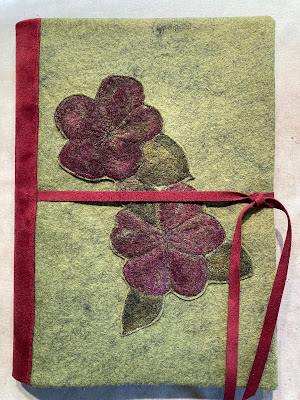 The lovely floral design was given to me by my pal & Woolworth booth mate, Judy Simmons, she used it as a sample in her machine needle felting class. I cut it from her base fabric and turned it into an appliqué motif for this felt book cover. 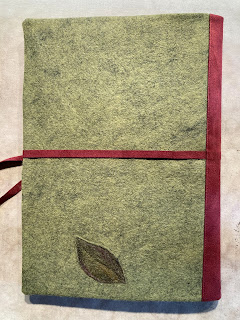 Posted by The Inside Stori at 1:49 PM No comments:

"Red Ginkgo Leaves" is finished! I sure appreciate all the wonderful comments on my last post. Unfortunately, adding a narrow grey border to the quilted piece at this point wasn't feasible.

Next I attempted to incorporate grey piping or a flat flange to the edges, however, the addition of only a narrow strip of grey simply had no impact. In fact, no matter what fabric I used it became distracting.

So I decided to bind it to provide a pronounced visual stop for the eye, rather than using a turned facing. 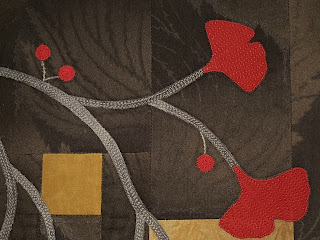 I'm very happy with the piece. I'm even more pleased and totally flattered to announce it's been purchased by a skilled fiber artist who has maintained a studio at Ginko Gallery in Oberlin, Ohio. I first met her as my student on one of my quilt tours/cruises and she's traveled with me countless times afterwards, becoming a good friend. As I said, I couldn't be happier..... thank you Nancy!

Getting to the finish line.  I had planned to echo quilt this project, but after the outline quilting was completed, that idea was scratched for fear of interrupting the background design too much.  All the squares and large rectangle were quilted in the ditch instead.

Another early decision was to finish the edges with a facing, rather than bind it.  But after viewing the piece on my design wall....I began to consider adding a grey piping, and then binding.

Now I'll be digging out all the grey fabrics I have to find one that's suitable. Of course I don't have enough of what I used for the branches.  Isn't that always the way.

Let's see what happens next!?! 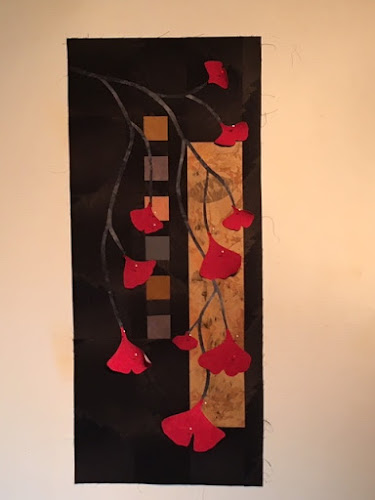 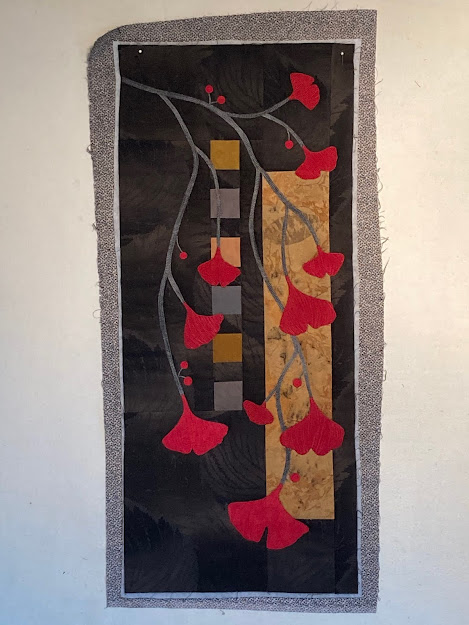 Stitching away to texturize the ginkgo leaves......enjoying the process! 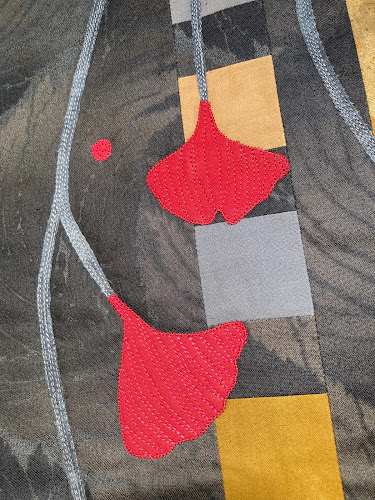 Posted by The Inside Stori at 1:36 PM No comments:

Honestly 2020 can't end fast enough for me....more health issues have slowed down process on my ginkgo leaf wall quilt. But happily, it's back on track (as am I and 'the husband'). The machine applique is completed & machine embroidery to enhance the leaves is next. 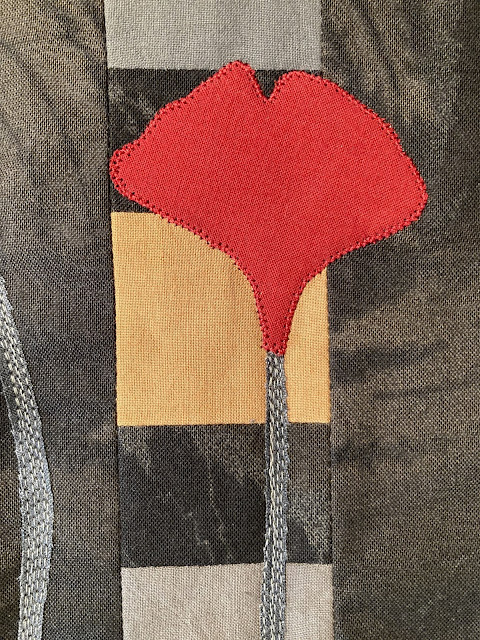 Posted by The Inside Stori at 12:34 PM No comments: