My PTA (Professional Textile Artists) retreat quilt is complete! It's quilted quite simply to allow the featured blocks to remain very visible.  My loft style studio suits me fine except when it comes to photographing quilts....unfortunately this is the best I can do given the setting. Trust me, it's not nearly as dark, & is far more vibrant !

I still have piles of asian style fabrics to inspire me to create new interesting settings to highlight the designs.  So I better get to cutting! 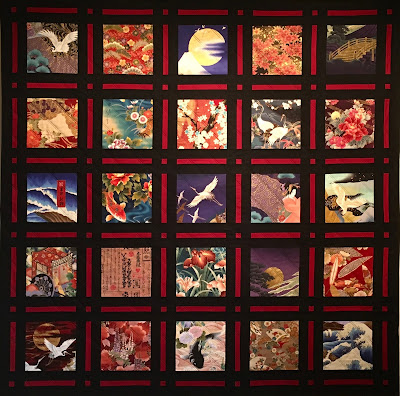 Visit these websites to see what other artists have been working on this week:  Nna-Marie's Off The Wall Friday, Sarahs's Whoop Whoop Friday, Crazy Mom Quilts.
Posted by The Inside Stori at 6:30 AM 5 comments:

I'll keep the retreat report solely focused on quilt making.....like most retreat gatherings.....we get silly and all those antics really need to stay only within our group!! 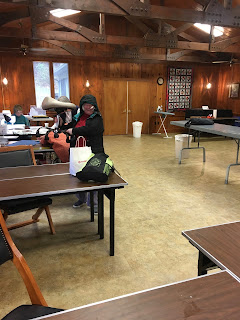 Lynn arrived all bundled up as it was cold up in the mountains....carrying a special chair to sit on...which immediately sort of fell apart as she adjusted the height!  Let the laughter begin!! 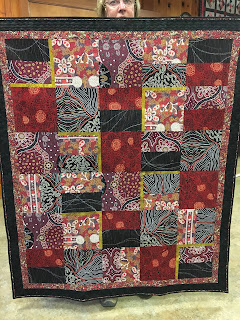 Marene brought a fabulous piece she made using ethnic fabrics.....love the bits of yellow/green to make it pop. 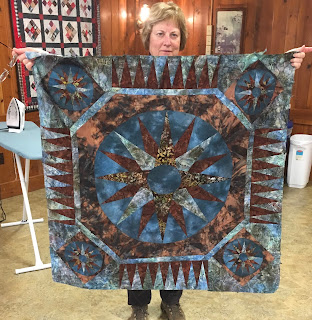 Here's her completed quilt top at the end of day 3! 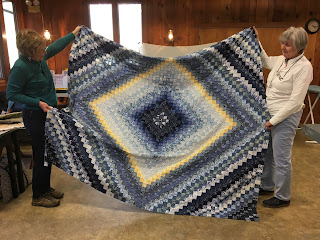 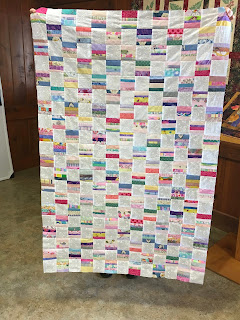 Kate sews faster with more accuracy than anyone I know......she brought a couple of kits she made up at home using her Accu-Quilt cutting machine....but STILL....there are a LOT of pieces that were sewn together. 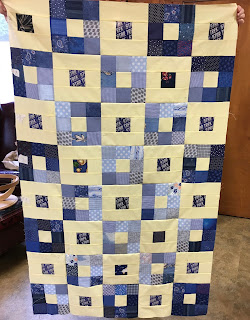 Here's another one Kate "whipped" up.....amazing use of scraps!! 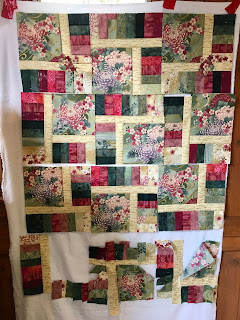 Judy too came prepared with everything cut and pinned to a piece of flannel.  Unfortunately, since her measurements were off, it took Kate to develop a rescue plan to make it all fit together.  It will be a beauty when completed. 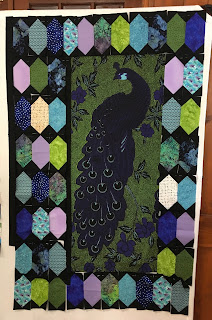 Leigh Anne teamed this great center panel with a truly inspired patchwork border....we all gushed over this design! 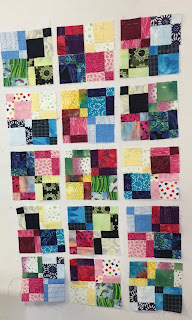 Barbara played with scraps.....she has such a knack for combining prints! 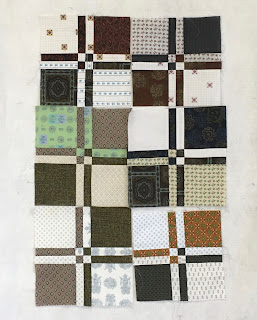 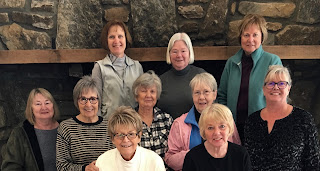 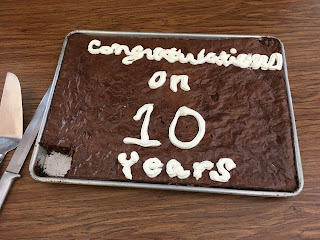 This question may benefit many of you readers. Some of my cutting rulers need replacing. I get inaccurate cuts because I can not seem to hang onto them while cutting.  Slipping is such an issue, despite working on a cutting mat.

I see ads from time to time about non-slip rulers.  Can anyone offer their results if you have one that works well.....perhaps also which ones NOT to buy.   I don't want to use those annoying stick on pads.....been there done that....they are a nuisance.

The Professional Textile Artists (PTA), a group of 14 quilters, just celebrated our 10th annual 3 day retreat.  It's a time we all eagerly look forward to each year. With all the chatting, ogling everyone's projects, eating, and beverage consumption....it's a wonder we get anything done!

I learned early on to come with my project planned out AND cut out....with copious notes. 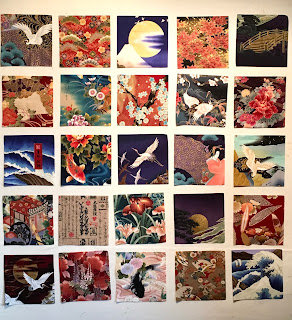 Given that I still have a huge stash of Japanese style fabrics I dug some out and selected 25 prints and cut 8" squares.  They were arranged and rows labeled on my home design wall. 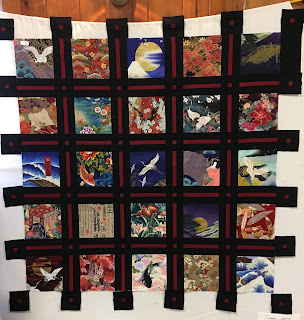 All the setting patches were cut at home as well.  This made for fairly carefree sewing at retreat....I'm NOT a fast sewer so this view on a member's portable design walls was after day 2!!

Despite ALL my planning.....somehow I was short on the red strips, so I came home with it pieced with the exception of the top and bottom outside rows.  I had brought extra fabric.....but given how poor my math was....it wasn't enough. 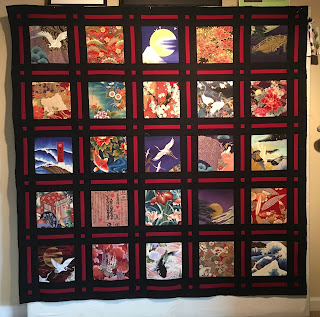 So, now at home it's all pieced and ready to be sandwiched.  It's 60" sq....and due to the size, not one I'm looking forward to quilting.  I've now made quite a few similar quilts....each time trying out a new setting designs.  It's become apparent that simple straight line quilting (vertical/horizontal/or diagonal) provides enough texture and interest without detracting from the beautiful feature blocks.

Do check back to see how that works out for this quilt!

In the meantime, visit these links to see what other quilters have been working on this week:  Nina-Marie's Off The Wall Friday, Sarah's Whoop Whoop Friday, and Crazy Mom Quilts.
Posted by The Inside Stori at 6:30 AM 4 comments: 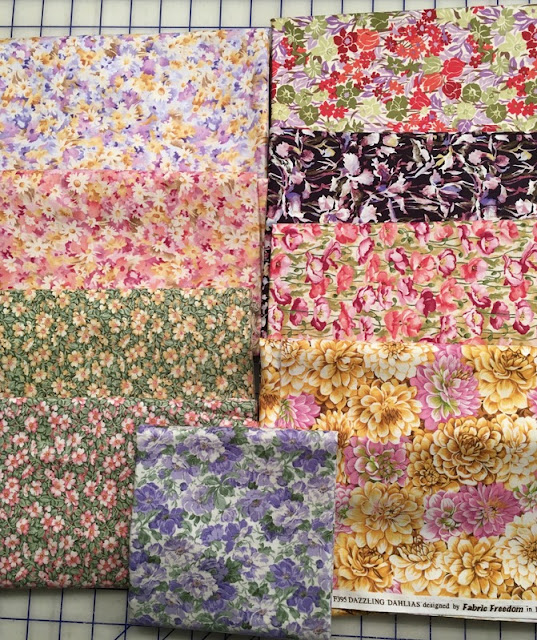 What could be better than a nice warm spring day and finishing this garden blossomed wall art quilt?!? 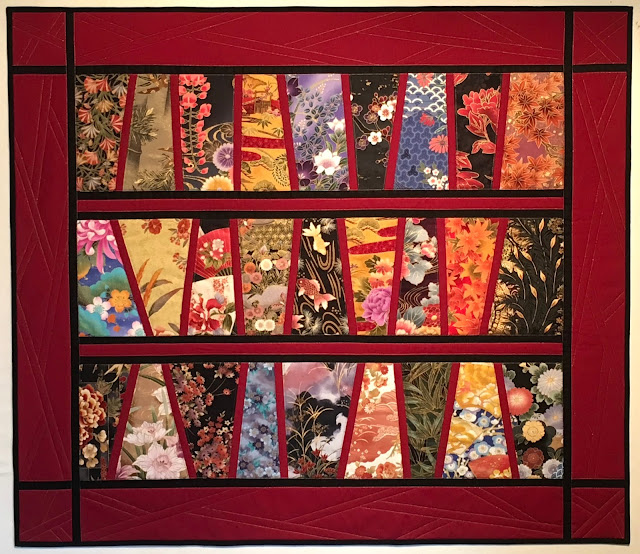 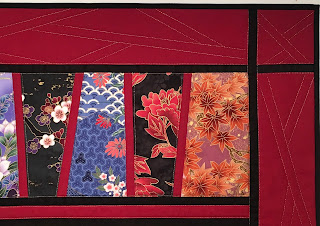 Despite the sunny day, my studio is so difficult to get good photos of my work. Hopefully with a different light pattern later in the day I'll be more successful. In the meantime...please enjoy this latest piece from my large Japanese fabric stash!
Posted by The Inside Stori at 6:30 AM 2 comments:

LISTENING TO THE QUILT

My last post mentioned that I was moving along to the quilting stage of this quilt, though I had no plan for the direction that would take. 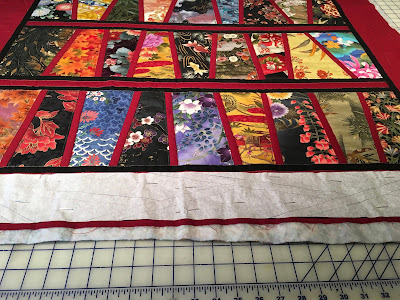 After considerable trial and error tests on spare fabric, it seemed best to keep it simple and allow the fabrics to speak for themselves. Once the quilting reached the borders I was stumped.  Eventually I decided to follow the theme of the uneven patchwork segments.  The design was worked out on tissue paper, pinned in place, and quilted along the lines using my walking foot.  One negative of course is having to remove the paper and all the tiny bits that remain between the stitches! 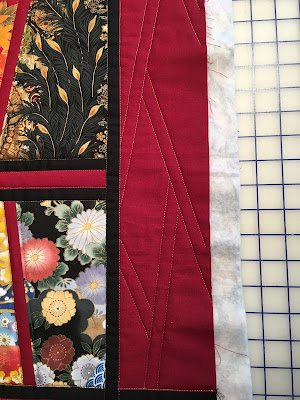 Because of the simplicity of the outline quilting of every section, for a better impact I chose to work with an antique brass thread. I'm happy with the look but oh my, I probably spent more time tying off each of the thread ends as it took to quilt the entire piece.

In general, I don't like the look of the tie off function of my machine, nor stitching in place at the beginning and end of each line.  So I always tie off and bury the threads by hand.  This metallic thread had a nylon core that made it impossible to use a self-threading needle as the thread shredded.  So it became necessary to thread a needle with the ends in order to bury them between the layers. It's interesting, I never broke a single thread while quilting but the finishing part was very time consuming.

Stay tuned for a photo of the finished piece.  In the meantime check out what other creative stitchers have been up to this week:  Nina-Marie's Off The Wall Friday, Sarah's Whoop Whoop Friday, and Crazy Mom Quilts.

IT ALL ADDS UP

As mentioned previously, my studio time would be limited for awhile, but that should never stop the creative process.  Little bits of time add up. 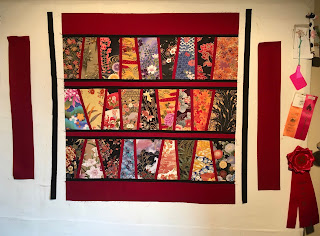 The numerous stacks of Japanese fabrics stored in my stash continually call for attention.  It's all excellent quality material, collected over a long period of time by a dear friend who gifted me a part of her inventory.  Never in a million years would I select this style to work with but somehow the challenge of using it to create one-of-a-kind quilts has captured my interest.

I had this setting idea for awhile but the math involved in cutting and piecing the strips was more than I was capable of.  It finally dawned on me I could do it by paper piecing since I wanted random shapes rather than symmetrical anyway. 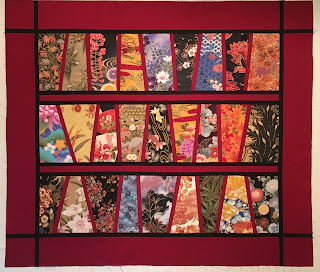 My vision didn't include borders but as so many of us know....the quilt will tell you what to do if you listen.  Next up will be making the quilt sandwich and machine quilting.  Right now I have no clue what direction the quilting will take....but I'll be listening very hard!!

Check back to see won't you?
Posted by The Inside Stori at 6:30 AM 4 comments:

For lack of current project news, I decided to share my recent disappointing failure.  The picture doesn't show the eyesores of the creases, wrinkles and bubbled fabric and paper map....what a mess.

It's extremely rare for me to give up on a project.  I don't know if this is a good or bad thing, but I can honestly say there have been less than a half-dozen projects I've given up on and trashed.  I usually do not surrender and somehow find a way to make it work....but this is beyond repair. 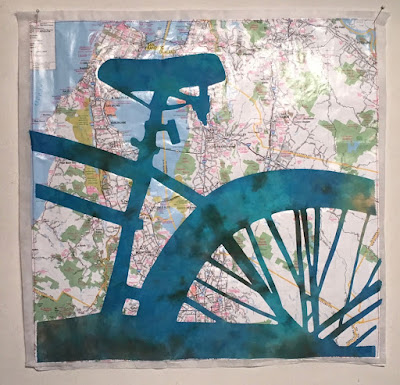 Our son is an avid bicycle rider, pedalling for pleasure and often from home to work. (Makes a mother crazy thinking about all that traffic, distracted drivers, and those narrow streets.)  The idea of this piece was to feature an enlarged silhouette of a bike on a map of the San Francisco/Bay area where he lives.

I didn't just jump into it.....a lot of testing went on before I stabilized the paper map and applied the fabric bike.....clearly NOT enough testing!!  Small sample tests don't always translate to larger scale projects.

It's human nature to show our successes and avoid mentioning ones that don't work.  But, the instructor in me still likes to share process dilemmas.  We can all learn from each other. Unfortunately, this one has no solution.  I have a couple of ideas how to begin again, one being a Spoonflower fabric map.....but I may be 'over it'.  One-of-a-kind fiber art takes work.....and I love waking up each day to more challenges.
Posted by The Inside Stori at 6:30 AM 7 comments:

Hooray.....it's finished and better yet, it's already sold!  I've been very inspired by the sunset photos posted on Facebook by my SIL, nephew, and high school pal Doris Kramer Sager.  Using a compliation of their stunning photos, here's my stylized version. 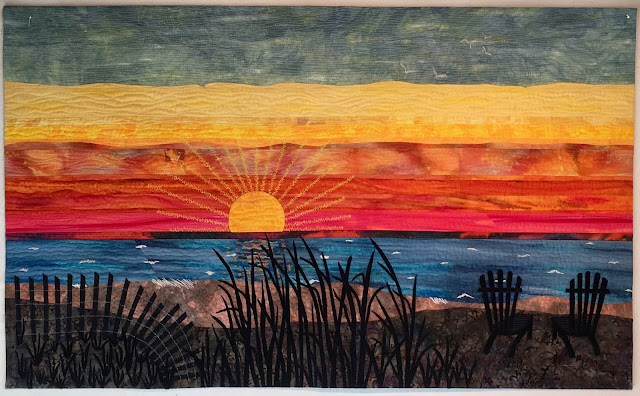 See what other artists have been working on this week:  Nina-Marie's Off The Wall Friday, Sarah's Whoop, Whoop Friday, and Crazy Mom Quilts.
Posted by The Inside Stori at 6:30 AM 10 comments: