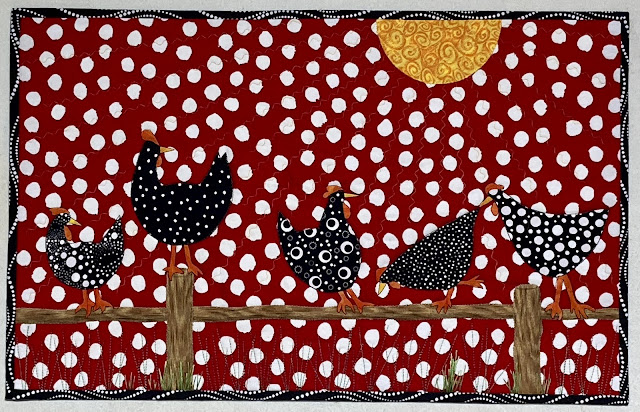 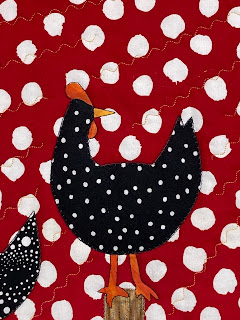 I wish you could have seen the design snap shot that appeared  in my head after uncovering this colorful bamboo leaf print from my stash. The finished piece barely resembles that much larger envisioned art quilt!

After creating the center panel it was apparent my ambitious idea didn't hit the mark.....so this is the result instead.  Which by the way, I am happy with.  Narrow art pieces can be just the right addition to an area in one's home that was lacking personality.

Covid spoiler again......so as it turned out, I had more time on my hands than expected this past week.  Here's my very last art quilt of 2021. 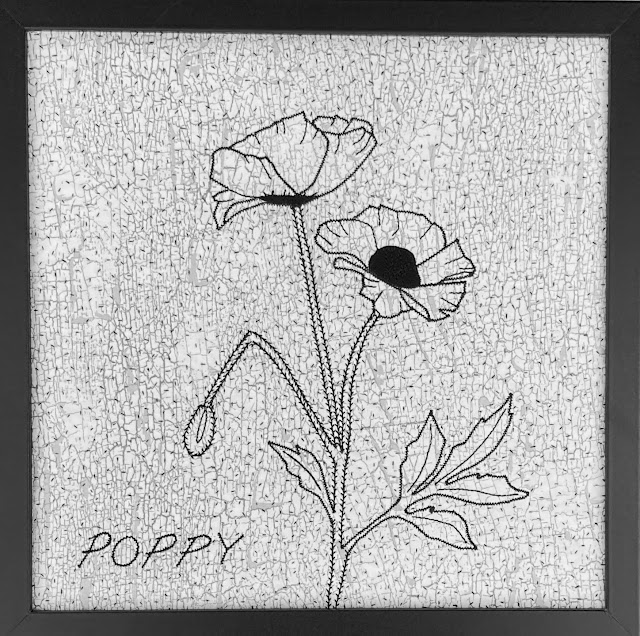 Poppy - 13" x 13"
Machine thread sketched & hand embroidered
on cotton fabric.  Wrapped on a canvas covered frame
and secured in a black wood frame without glass.
Posted by The Inside Stori at 12:07 PM 3 comments:

I authored my first book in 1980......and it wasn't quilt related!  "I'll Eat Anything If I Make It Myself" (pbh publishing) is a children's cookbook!!

A friend shared her excitement of her grandson's upcoming Christmas visit and their gingerbread mansion project.  It reminded me of one I did annually for our son's elementary school class.

Enjoy, feel free to copy.  I now own the publishing rights to this book so it's my small gift to you my faithful readers!  Merry Christmas!!!! 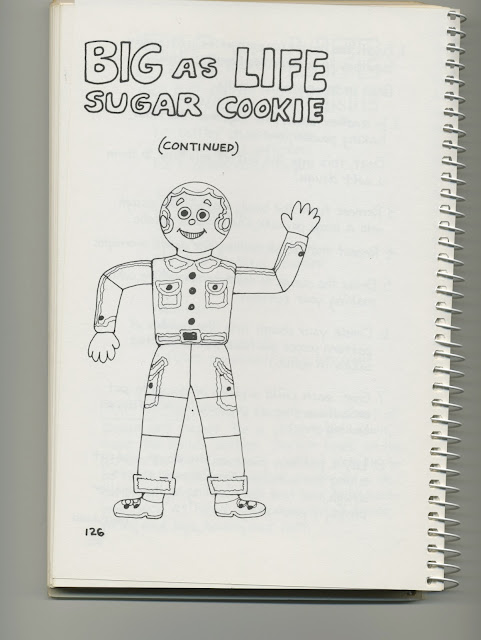 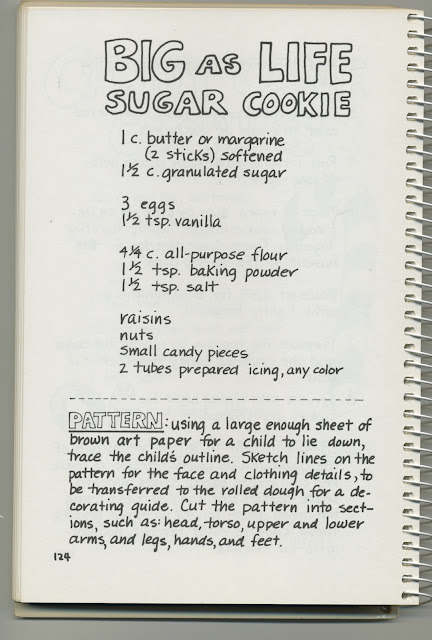 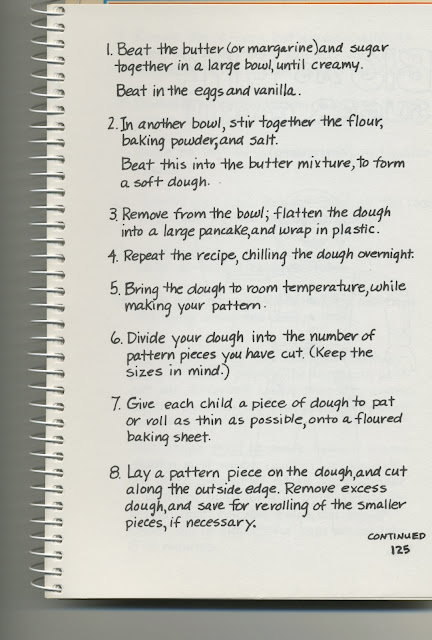 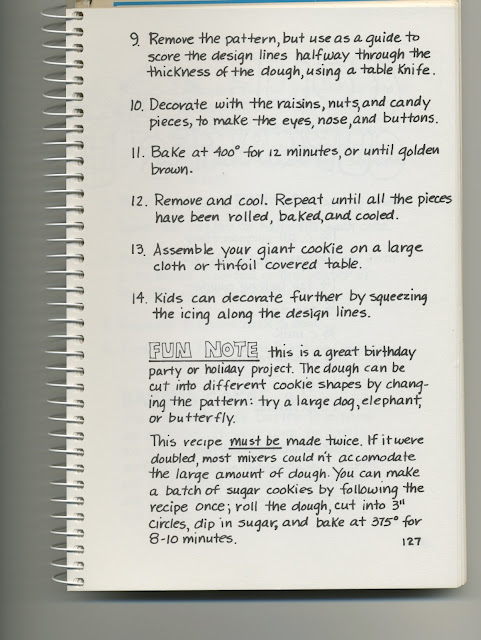 I'm guessing this will be the last new work of 2021, perhaps with a nod to the flowers blooming in 2022.

A gal can really get hooked on chicken scratch embroidery!  Some might call it boring, but even though it's super time consuming, I find it relaxing. 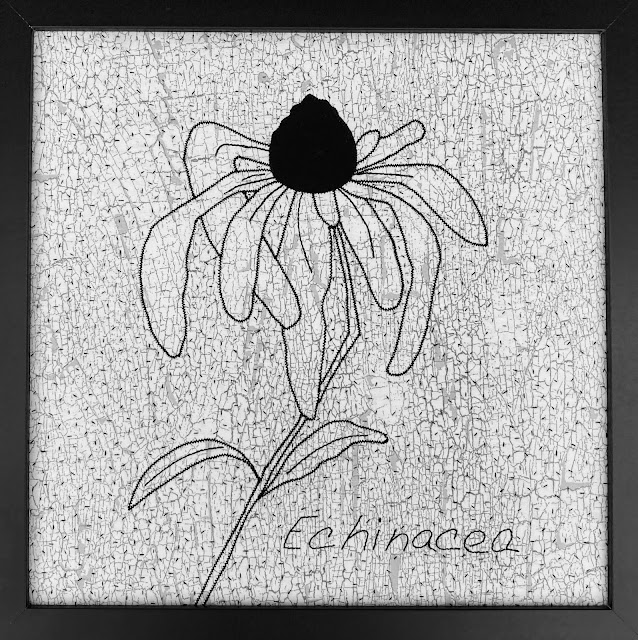 ECHINACEA - 13" x 13"
SOLD
Machine thread sketched & hand embroidered
on cotton fabric.  Wrapped on a canvas covered frame
and secured in a black wood frame.
Posted by The Inside Stori at 2:28 PM 3 comments:

I enjoyed the 8+ hrs. of handwork spent on my previous framed art quilt piece, so I made another one. Usually my work isn't very similar, but when ideas expand.....you must go with it! 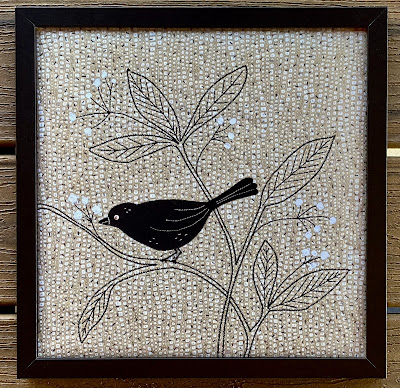 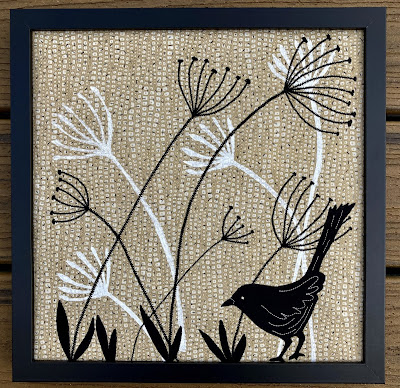 My pal and super talented fiber artist, Denny Webster introduced me to the technique of using masks when adding motifs to fiber.  She excels at layering images! 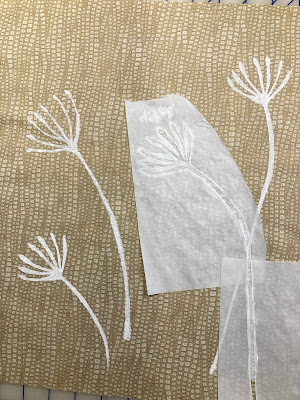 The hardest part was cutting the freezer paper, oh ya and then finding the right consistency of acyrlic paint. In person it's more transparent than it appears here.
Posted by The Inside Stori at 10:01 AM No comments:

BLUE RIDGE MOUNTAINS ON MY MIND

The mountain views we enjoy here in Western NC never get old.  Recapturing them in fabric never gets old either. 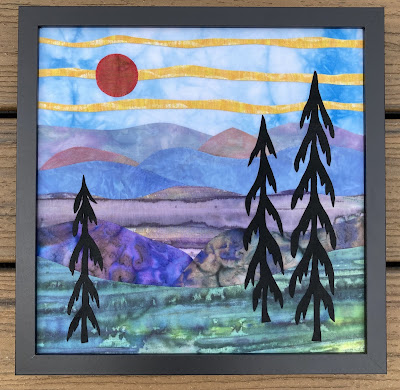 FABRIC TOO PRECIOUS NOT TO USE!!

The day Doreen Speckmann called and invited me to join her on her famous Caribbean cruises I felt like Ricky Nelson had invited me to the prom.  Okay....that dates me right??
We made a great team and eventually with Doreen's blessing, the tour company offered me a hosting position on additional trips. 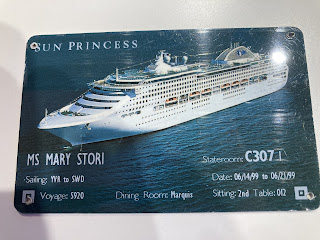 Little did I know that this June, 1999 Alaska cruise would be our last together.  Doreen passed away Sept. 18, 1999, in Ireland while I was leading a cruise/tour to the Greek Isles. 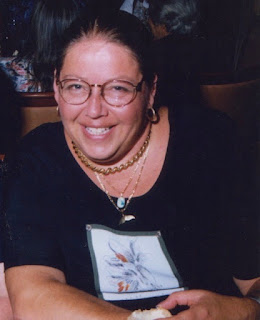 DOREEN....no last name was ever needed for her huge fan base. 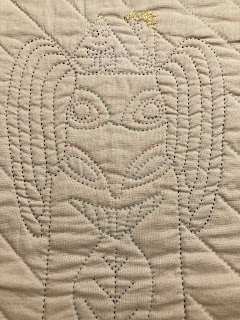 My project for that trip was a small hand quilted art quilt for  students to learn hand quilting skills. Doreen's signature characters, "Peaky and Spike" are featured in a place on honor at the top of the totem pole. 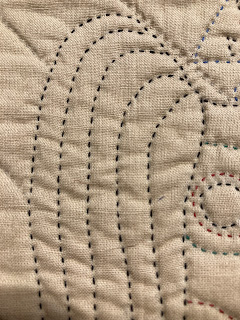 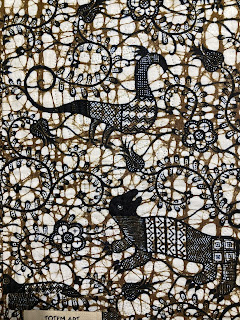 This wonderful cotton fabric from Indonesia was the backing.  For years now I've treasured this little quilt, both for the design on the front and the fun backing which was given to me by my beloved MIL.  I simply could not discard it!!  Instead it was up-cycled.  The shape of the hand quilted design on the front didn't translate to the many, many ideas I dreamed up.....so the quilt was turned over and became book covers. 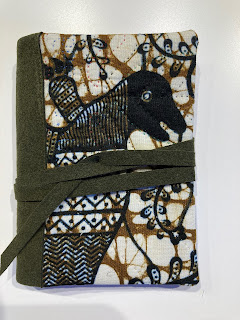 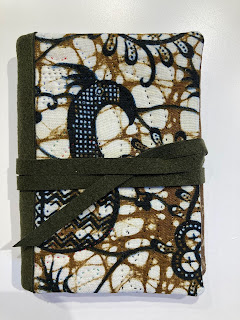 Those great memories with Doreen and all the participants who became friends worldwide will be with me forever even if the fabric isn't.
Posted by The Inside Stori at 6:00 AM 4 comments: