My jury duty is over for the week, in fact.....I can't be called again for another 2 years. Would you believe that out of 65-70 potential jurors, my name was the 5th one called to actually sit on a jury! I've never even been in a jury poll before, much less sit on a jury. It was a fascinating experience.
The thing that impressed me most was that not one of the jurors whose names were called tried to get out of their duty/responsibility. It seemed to me that the judge offered a lot of opportunities to get excused.
It was a criminal case......and not as black and white as you see on TV. I don't know what the law is elsewhere but here, all 12 jurors had to agree upon the verdict or else it would be a hung jury. I expected there might be long discussions.....but the diliberation went fairly quickly. To everyone's credit, we decided to discuss some of the irregularities BEFORE voting. In the end however, the defendant was declared guility on one count and not guilty on the other. What was scary was knowing there was a lot of info we weren't/couldn't be told....therefore we had to read between the lines. I can clearly see how if one side was respresented by an incompetent or indifferent lawyer, it could make a huge difference on the outcome.
So now.....back to quilting. I thought long and hard whether I was going to share this with you all.....BECAUSE the person who purchased this piece reads this blog too (and she bought it before it was even finished....thank you for your faith in my work Kay!!) I sure didn't want her to get nervous about the outcome. I am a true perfectionist and believe in doing the best workmanship possible. At this moment, it isn't. Hopefully, you all will be encouraged to know that everyone has those oops moments too. 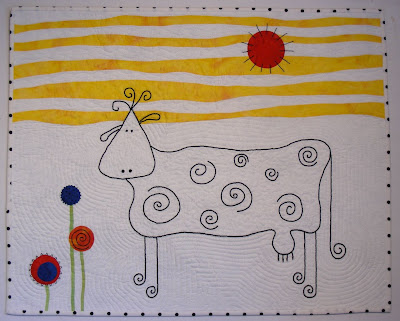 I completed the hand quilting on this Calder inspired wall quilt....and rapidly, too rapidly moved on to the task of binding. It's actually something I enjoy doing. I LOVE the way the polka dot fabric works....when it works..... But I'm sure I don't have to point out the problem with it...do I?
The dots aren't printed in a straight line on the fabric.....I spent a lot of time trying to cut my strips so the black polka dots would line up on the front. Thought it was going to work but it just didn't and worst of all....one can see the shadowing of the dots on the other side of the double fold binding.
DARN IT ALL.......and stupid me....I thought I had it right and just went along my merry way and hand sewed it all down before really LOOKING at it. Well.....it must come off and be replaced. 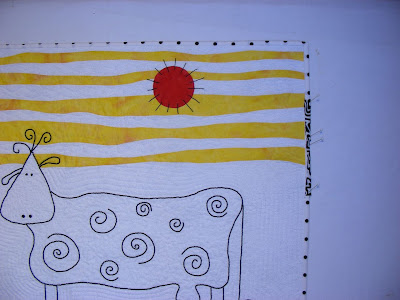 So....I dug into my stash, (which isn't as large as you might expect.) Nothing....there is nothing that will work. I have this swirly black and white print....but fear that is a bit too strong for the piece...but maybe not. 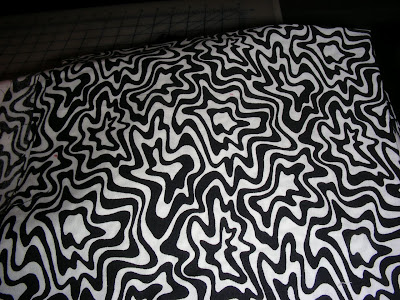 We have very limited resources here to purchase fabric, but I'm going out to see what I can find today. You know what sewing activity I'll be doing tonight don't you? I wonder how long it will take to remove the binding? Far less I expect than attaching it!
Don't worry Kay.......I'm on it and if you like the above black and white fabric.....I'll use it.....but me thinks I should find something with less black.
Posted by The Inside Stori at 6:48 AM

Mary, I love this piece, and I can share your frustration. I'm having the same problem with pink with white polka dots that I'm using to bind the neck and armholes of a sundress for my great granddaughter. How about pin dots? Or a small black and white stripe on the bias? I have a piece of a Moda black on white hexagonal chicken wire print that I'd be happy to give you if you will send me your mailing address. It gives interesting effects when folded on either the width or length. I have no idea what I had in mind when I bought it, but the idea is long gone. - Ellen Lee

Ellen....I'm going to try to dig out your email address and connect personally....but wanted to thank you for your offer immediately....you are the sweetest.

I made a trek into Asheville today and got a replacement fabric, which now that I have it home, may not work any better.....will post a photo tomorrow...hope I have time today to experiment a little bit.

Mary I agree the 1st fabric was to strong. Hope the new fabric works.

The email address you have for me is obsolete. The correct address is plee7@stny.rr.com

The chicken wire print gives interesting effects, depending on how you cut and fold it. The oofer stands. - Ellen