Sure enough......I followed Tim Gunn's advice......"Make it Work" and I did. It took years for me to learn the valuable lesson: to allow enough time for experimenting and to listen to your inner voice as you view your work with a critical eye. If the design looks 'off', it probably is. Some projects just need to 'percolate' before the appropriate fix is discovered. No...for me, that doesn't come in a dream. I have to work at it....which is the point. Sometimes we get too focused on the 'end' rather than the process of creating a successful end. 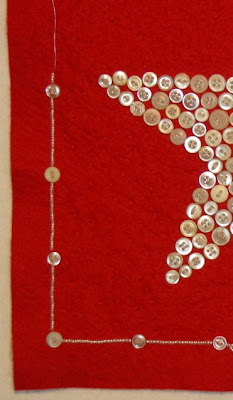 After numerous false starts for finishing ideas....I decided to pursue framing the star by repeating the bead and button theme. Once several segments were added, I realized it look a bit puny. 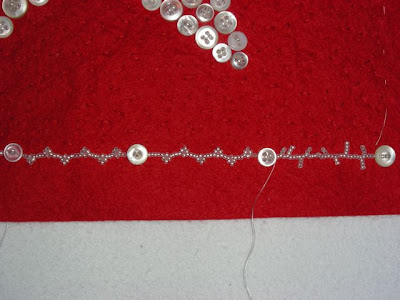 So......before going any further (in case I changed my mind about this direction and had to rip it out), I went back and began embellishing the straight bead line. The fringy look on the far right was the first I tried. Nope....not quite right......so I played around for (honestly) about another 30 mins. adding and removing beads....until I came up with the treatment in the two segments on the left. 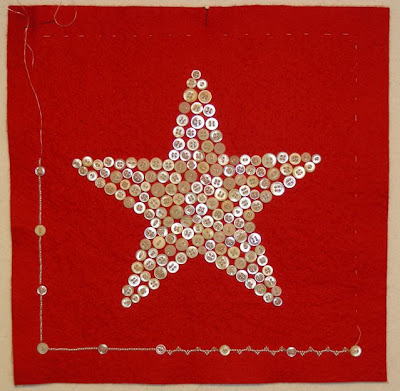 Now I was happy......this techniques isn't in any of my books.....it's just one I created by necessity......along with a happy dance! I hope to work on it later today....though that may be difficult since my fingers will be crossed in hopes of a BIG win for the PACKERS against the Chicago Bears (we HATE the Bears!!).
After framing the center motif with this bead/button sequence.....the piece will require additional finishing; squaring, backing, and finishing the edges. I'm sure that will be another "Make It Work" kinda process since I haven't made those decisions just yet. 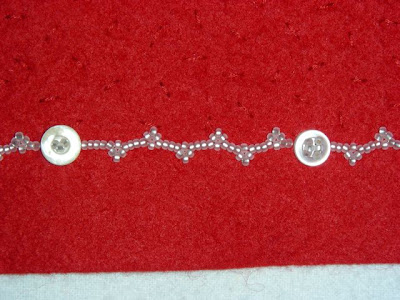 Detail
The continuing construction details will be posted as they occur.....which may have to wait till later in the week. Starting tomorrow, I'll be visiting with the Lake Oconee Quilt Guild, near Madison, GA for a few days. If you are nearby......please join the fun.
Posted by The Inside Stori at 10:02 AM

I love it! It was worth the wait! Happy New Year from Richland County :)

Love it, Mary!
You're not merely "on the right trail", but i think you've got it knocked! It's gonna be beautiful when you get it done.
=-)

Create change. It real adds sparkle and elegance to the star. Fabulous!