I had more indecision making this project than I have on any 4 together......maybe it's my age.....but here's how the drama unfolded..... 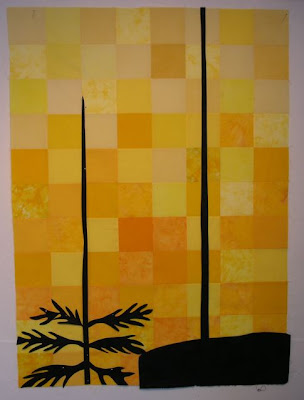 Okay, so given the fabrics I had, the background design took some figuring out. Of COURSE I could have gone out and purchased more....but like many of us quilters who have been stitchin' for years and years......I'd like to utilize what I have in my stash, even though my stash is actually not that impressive.
I also wanted the main tree motifs to be visually bold, so using a simple patchwork background was the solution for the lack of fabric and to highlight the design. Once that was made, I began to play with the placement of the trees and the mountain ridge. 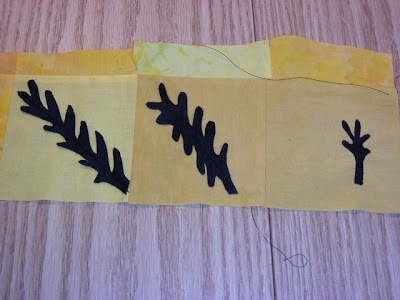 After I felt like I had a good feel for the design, I decided to experiment with the stitching (applique) method, since distortion of the background was a concern. If there would have been more time, I would have hand appliqued the branches. Instead, I tried fusing, attaching with machine applique...both with a zig-zag and blanket stitch. Even using a stabilizer, I could see this would end up being a huge mess.....and in part, it's because I'm not an accomplished free-motion stitcher.
So I decided to utilize a method I created years ago.....fusing two layers of fabric together and cutting out the shape from this stabilized unit. The edges are raw but shouldn't unravel..... With this method, the branches could be attached by stitching a few lines through the centers of each motif, giving the design a 3-D appearance. 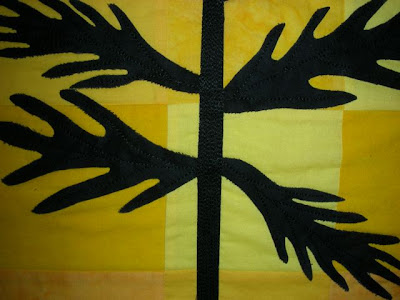 This approach worked, but due to all the handling.....some of the edges became fuzzier than I would have liked....the problem increased as I hand quilted the piece. Ultimately, I had to trim each one with a sharp embroidery scissors....difficult to do for fear of cutting the background. I blame this problem on the fabric. Though it was supposedly a good quality quilters cotton.....the weave wasn't as tight as it could have been......oh well....problem solved in the end.
That's what keeps me interested......I don't look forward to problem solving but find doing the 'happy dance' afterwards to be worth it! 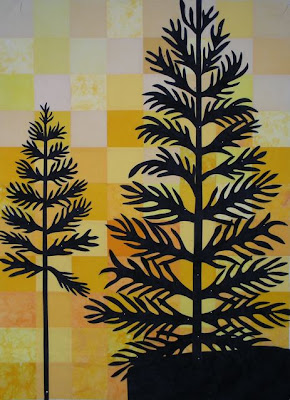 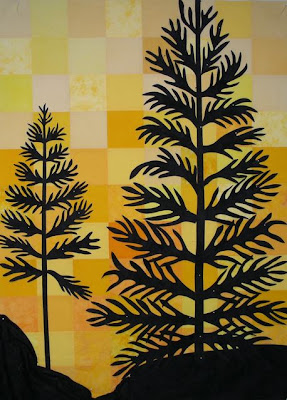 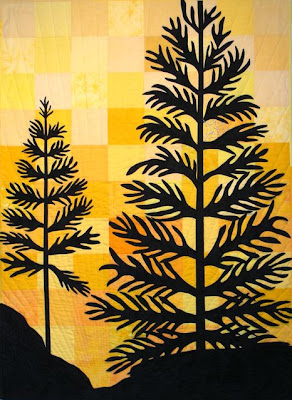 Finally, the ridges were hand appliqued, the trees were attached with machine stitching, the quilt sandwich was made and the layers were hand basted. The hand quilting took some patience because the needle had to travel between the layers beneath all the branches.
So.....with the quilting completed......the binding and another touch were left to do......I'll share those tomorrow......
Posted by The Inside Stori at 7:46 AM

LOVE this piece, Mary! The trees are so dramatic and I love your pieced background and how it gets lighter at the top. Smashing! Know what you mean about the machine quilting thang -- I still haven't gotten any good at that either. Besides, I like doing the handwork!

Love this piece Mary.! The trees turned out great and I love how you pieced the background -- very glowy and dramatic!

It's beautiful, Mary! I love the shading of the pieced background.