After learning we were to bring a baby photo of ourselves to our recent fiber arts retreat....I realized....yikes, I have very few.  We had basement water damage to lots of our stored possessions when we lived in IL....after two moves, I sort of forgot about the loss.
Of the few I had, not a single photo was of just me....which was kinda stunning when I thought about it.  Of course being a twin, one gets very accustomed to sharing one's life.  Of course that could sometimes be viewed as bad...or even very bad, BUT......it was had lots of benefits.  As a teen we had twice the number of clothes because we could share!  It also meant that you always had a friend.
Thanks to my brother who was the keeper of all important 'stuff' when my Mom passed away.....I now have some precious photos of my twin sister and myself. 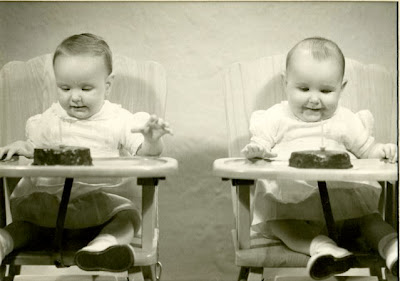 Obviously, we were celebrating our 1 year birthday.  I'm on the right.....my sister Nancy is on the left.  In 2001, through a DNA test, we learned we were identical.....I still dispute this because clearly we didn't look identical.  She has hair....I didn't! 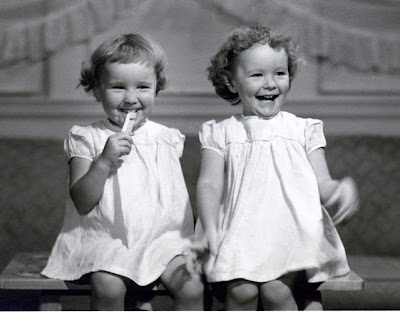 Nancy is now on the right....curly hair, but not mine.  The Dr. who was involved with this test said that DNA does not lie.....the chances of us not being identical were.....well I can't possibly quote the scientific mumbo jumbo.....but it was something like an amazingly long number with lots and lots of zeros to the ninth power.  I have no idea what that means....but he had an amusing way to explain it.....  Quote - "The DNA does not lie, and if it did....then OJ didn't kill Nicole."  Pretty weird remembering the way he put it.....but he explained that they've discovered lots of new data about twins. 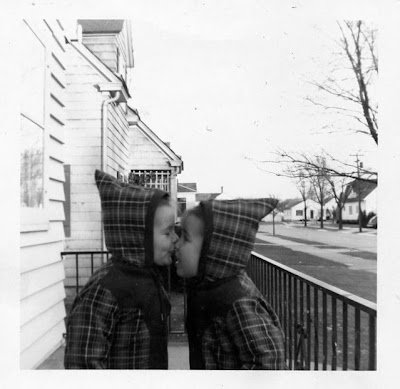 Sweet!  When we were young we were dressed alike, and if not exactly alike, the style would be the same but the colors different. 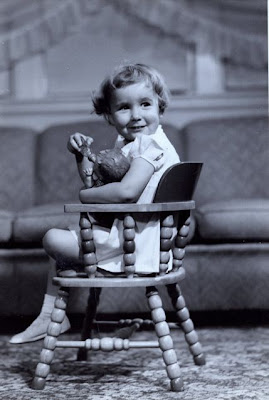 Here's one of the very few single photos of myself at 2 1/2 years old.
Posted by The Inside Stori at 8:02 AM

How adorable you both are? Nice to see photos of you and your sister.