Ya, I KNOW Christmas is over......but out there in the big wide world there are magazine editors already planning their Christmas issues for next year.
I've been contracted by one well known magazine to design a couple Christmas ornaments.....I'll alert you faithfull readers when and where the article will appear when I have more publishing details.
While I have other irons in the fire......naturally, I immediately got enthuastic (you should see my studio...yikes!) and began playing with several ideas all at once.  Here's one: 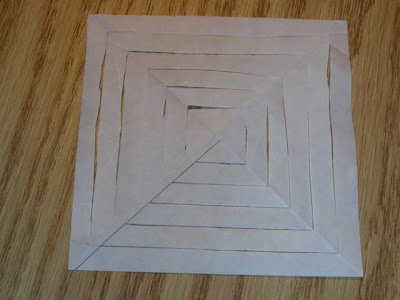 It's based on an old paper cutting method, to create a star ornament from white paper. Basically, one cuts a square, folding it diagonally in half, then again......next, cut several slits, nearly up to the single fold through all the layers.  This is what it looks like opened.  I used freezer paper as a cutting template so I could adhere the pattern onto felted wool (since the felt is too thick to cut from a folded state.) 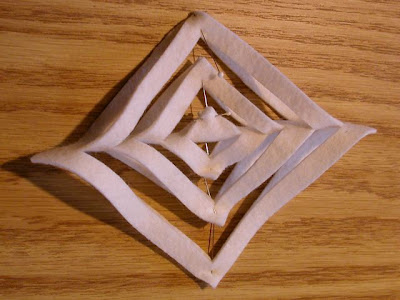 Once my felted wool was cut, I pinned each of the corresponding corners together, alternating the direction the corners were folded.....first to the right then to the left.  This creates a spiral effect.  When using paper, the corners are taped or stapled.  Paper of course is stiffer and provides a much sharper appearance. 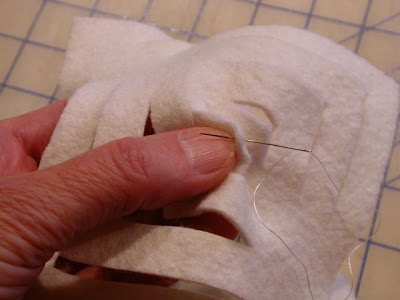 My idea was to attach the corners using beads......clear seed beads didn't show up enough, so I used pearls instead.  I hid the knot between the layers....see above.....then stitched a seed bead to each side, the ends are tied off and tail clipped. 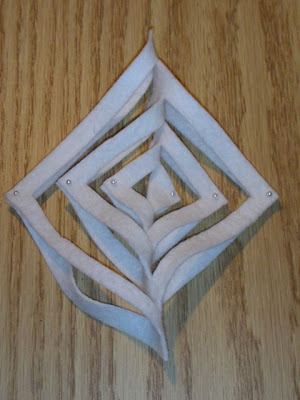 A ribbon will be attached at the top for hanging.  When using paper as a kid, we hung 6 units together.....like a 6 pointed star.  Felted wool is too floppy to show the definition of the star.....but I sort of like this as is.
However, I'm going to experiment by adding more pearls to this one, and play some more with smaller sizes, narrower strips, and other materials. This one began with a 6" sq.
I'll be silent for a few days......as I head off to a quilting retreat with my fiber art group.....no phones (cell or otherwise) , no tv, no computers.....good thing we are all great friends.  I'll have my camera ready as I know the talent in this group must be shared....not to mention the fun! See ya!
Posted by The Inside Stori at 7:44 AM

Great fun, Mary! Have a blast at your retreat! Hugs, Jan Krentz

I hope you have such a wonderful time!
Cheers,
Dionne

OK, let us know where your retreat site is. Have lots of fun.