The family wedding we attended over the weekend was so special...we adore our niece and have a great kinship with her (now) husband already.

The wedding/reception followed most of the typical traditions.....however their special personal touches were so inventive. 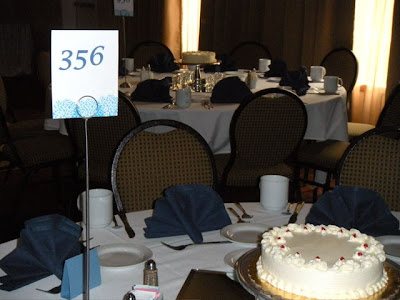 For instance....look at this table marker......why on earth would anyone number a table like that?  NO.....there weren't 356 tables.  I was going to explain the significance but just now as I'm typing....I decided to ask if anyone knows before I reveal it.  Do you??


We loved that each table had their own cake....of course the bride and groom had their special one too AND the groom had a nice big chocolate cake with chocolate frosting that was offered to guests as well.


Now...here's the really amazing treat......  click here for a very short video taken by 'the husband' (mine...not the groom).  In case you aren't inclined or don't have time to click over to youtube....let me explain.  They hired the University of Wisconsin's Badger Marching Band to appear at the reception.  And did they make an appearance......only a few people knew this was happening.....so imagine the commotion when we heard them playing (loudly, very loudly) as they marched down the hall and into the ballroom.....amazing!!


Who'd have thunk you could hire a small contingent of band members for such an appearance?  My clever SIL, that's who!


UPDATE.....Wendy asked about the table numbers.....(surprisingly was the only one)....guess that means personalizing is just that personal to those close by others...not so much.  Anyway....the numbers all referred to model numbers of Porsche's.  Our niece's guy shares our passion for autos that begin with a "P" and unfortunately end in dollar signs!  We got a big kick out of that!
Posted by The Inside Stori at 1:14 PM

Oh, that band procession was AWESOME! Can't imagine how awesome it was in person!
And ... okay. I give. What's up with the table number?
Glad a good time was had by all. =-)