WARNING.....this is not a fiber related post......nope....it's nearly football season and that means all eyes in this household turn toward Green Bay, Wisconsin.  Given that I grew up less than a hour away from Lambeau Field....The Packers are truly in my blood. 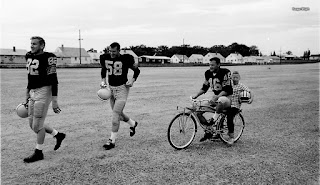 As is often the case, traditions evolve on their own....not force fed.  They say the now hallowed practice of players riding kid's bikes from the locker room to the practice field may have begun in 1959.  Some believe one or two players who arrived late asked the local youngsters who were hanging around in the parking lot if they could ride their bike to the field....hoping to arrive mostly on time. 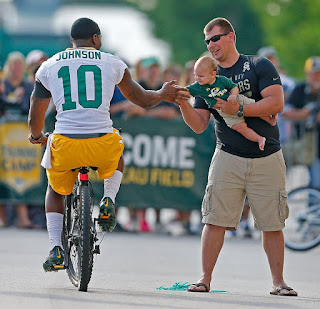 By the 1970's the once sporadic  bike trek, became embedded.  The Green Bay Packers are often referred to as "America's Team".  The only publicly owned, non-profit NFL franchise!  Today it's a family affair.....father's bringing the newest fans to watch the parade of bikes (and kids lending the bike).....making their way from the stadium to the practice field. 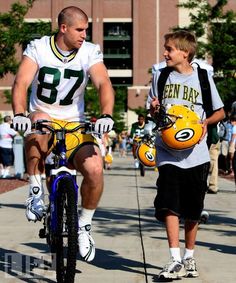 Posted by The Inside Stori at 6:30 AM

I don't remember reading about this tradition on your blog before! Or did I ignore it because it was the Packs and not the Lions! HA What a fun tradition!!!